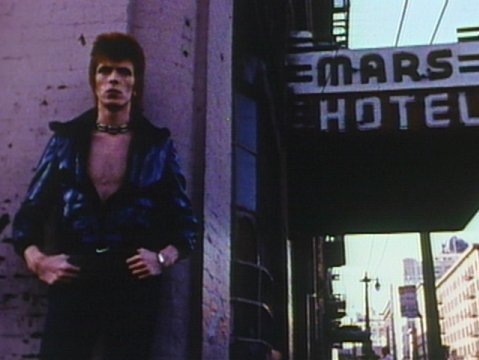 In August 1981, the world was given MTV. Since then and to every generation that followed the ability to watch music videos featuring their favorite music artists for entertainment has been made readily available. However, why watch them? Music is not a visual medium such as movies or regular television. By making it one, the music video has to appeal to more than just eager ears, but as well satisfy hungry eyes. In a sense, music videos must tell the audience a story without using regular story telling techniques, but instead rely on the brain's psychological power of perception.

This is called synaethesia or the mixing of the senses. It is the human brain's capabilty to experience secondary perception's that stimulate from primary ones. Thus people sometimes feel that they can taste colors or see what they hear. This is also how modern music videos tell stories that stimulate the brain without usually telling any kind of story at all.

Today, this point is obvious, but where did music videos stop being mockumentries made by The Beatles and start becoming what they are now?

The answer can be found in 1972, when rock and roll photographer Mick Rock met the up and coming David Bowie in his Ziggy Stardust phase.

In the next two years Mick, "The Man Who Shot The 70s", would produce many classic images of Bowie as well as shoot four music videos for under $1500 of his songs 'Space Oddity', 'John, I'm Only Dancing', 'Life On Mars?', and 'The Jean Genie'. The last of these four is where the modern music video first makes its appearance. Along with the other videos, Rock and Bowie would path the way for what is now accepted in modern music videos.

Shot in a day for a mere $350, the video for The Jean Genie was the first music video to use cross cuting performances from different locations a technique now second nature. Half of what is seen in the video is Bowie in concert and the other half is shot on a stage for the video. It also featured footage of Bowie in front of the Mars Hotel in San Francisco with an actress friend, Cyrinda Foxe. The brief images of her dancing tell loosely a story of who this girl might be, especially in relation to Bowie, without using any real concrete story plot. The viewer simply knows that she is The Jean Genie the moment she is seen. Not before this time would have anyone included who the song was referring too.

The following videos were made much in the same way. Space Oddity features Bowie by himself in a darkened recording studio. Colorful tinges of green and red lights play over the sound equipment. That essentially is all that is shown, but the equipment takes on a new meaning presented in that light. The viewer is with Major Tom in space. Once again, obvious now, but in 1972 this was an outrageous new insight into telling a story that plays only to the senses. The audience knows exactly where they are without truly being shown anything concrete.

John, I'm Only Dancing with its stark lighting later employed to perfection by Rock with his cover for Queen's Queen II. The original video was banned by Top of the Pops for overly homosexual tones as it featured two androgynous dancers. It's interesting to note that there is indeed nothing in the video homosexual at all. Why the ban? By not showing anything, but appealing to the senses the video let's the audience understand what the song is truly about (it should be noted that the songs lyrics can be taken as a man speaking to a friend over a girl just as easily as a man speaking to another man concerning their relationship).

The last video for Life on Mars? is according to Rock his favorite of the four. Simpler and yet beautiful in its technique it shows Bowie singing alone against a white backdrop. Over exposing the footage gave Bowie an ethereal like glow. At the end of the video his hands play over thin air while on the song a piano plays in the hollow background. Of course it is implied that he is playing this piano even though he is actually not playing anything at all.

But that's not something that was seen before they did it; it's just something they knew the audience would appreciate and understand.