• On this day, 37 years ago, saw the debut performance by DAVID BOWIE as John Merrick in The Elephant Man play at The Denver Auditorium Theatre in Colorado in 1980... 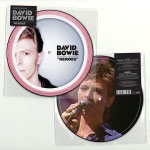 This limited edition of "HEROES"

is to be released on 22nd September via Parlophone.

The A-side picture was taken by Sukita in Japan 1977, and the AA-side was shot at the recording of the 'Marc' TV show in September, 1977.

davidbowie.com have exclusively announced details of the next DAVID BOWIE Box Set.. 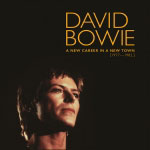 the third in a series of box sets spanning Bowie's career from 1969.

The follow-up to the awarding winning and critically acclaimed DAVID BOWIE 'FIVE YEARS (1969 - 1973)' and DAVID BOWIE 'WHO CAN I BE NOW? (1974 - 1976)' will be released on 29th September and will contain a brand new remix of the 1979 album 'LODGER' by long time Bowie producer/collaborator Tony Visconti.

The eleven CD box, thirteen-piece vinyl set and the Mastered For iTunes and standard digital download sets feature material officially released by Bowie between 1977 and 1982. It includes the so-called 'Berlin Trilogy' of albums on which he collaborated with Visconti and Brian Eno, and is completed by 'SCARY MONSTERS (And Super Creeps)'.

The box set, named after the final track on side one of 'LOW', includes 'LOW', '"HEROES"', 'STAGE' (ORIGINAL and 2017 VERSIONS), 'LODGER', 'LODGER (Tony Visconti 2017 Mix)', 'SCARY MONSTERS (And Super Creeps)' and 'RE:CALL 3'. Finally we have the '"HEROES"' E.P., which rounds up the German and French album and single versions of the track in one place for the first time, a compilation exclusive to the set celebrating the 40th anniversary of the song.

In the vinyl version of the box the original 'STAGE' will be pressed on yellow vinyl, replicating the limited edition U.K. release of the time. The 2017 version of 'STAGE' features two previously unreleased tracks.

Exclusive to each of the box sets is 'LODGER (Tony Visconti 2017 Mix)'. The remix was started with David's blessing before his passing in January last year. Tony Visconti has revisited the original multi-tracks at Human Studios and remixed the album with the benefit of modern technology to better highlight the album's nuances. Always a personal favourite of David's, this version of the album will also feature newly 'remixed' artwork featuring unseen images from the original cover photographic session from the archive of the Estate of photographer Duffy, working closely with his son Chris.

Also exclusive to each box is 'Re:Call 3', a new compilation featuring remastered contemporary single versions, non-album singles and b-sides, and songs featured on soundtracks. The cover features a photo by Christian Simonpietri taken at Hansa Studios in Berlin during the '"Heroes"' sessions in 1977. The 'Baal' E.P. in its entirety is making its CD debut while 'Beauty And The Beast' (extended version) and 'Breaking Glass' (Australian single version) are making their debuts on CD and digital formats.

'Beauty And The Beast' (extended version) is available as a digital download upon pre-order of the box set. This version of the '"Heroes"' album track is making its digital and CD debut having previously only been available on a rare US promo 12" and as a limited 12" release in Spain.

The physical box set's accompanying book, 128 pages in the CD box and 84 in the vinyl set, will feature rarely seen and previously unpublished photos by photographers including Anton Corbijn, Helmut Newton, Andrew Kent, Steve Schapiro, Duffy and many others as well as historical press reviews and technical notes about the albums from producer Tony Visconti.

The CD box set will include faithfully reproduced mini-vinyl versions of the original albums, and the CDs will be gold coloured rather than the usual silver. The vinyl box set has the same content as the CD set and is pressed on audiophile quality 180g vinyl.

*A New Career In A New Town (1977-1982) will also be made available in High Definition audio digital formats (192kHZ/24bit and 96kHZ/24bit). Content varies from other formats due to the resolution of the available original source material. 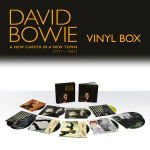 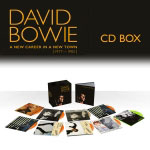 Note: Lodger (Tony Visconti 2017 mix) is not included in this digital box set.

The running order for Re:Call 3 CD differs from the vinyl version.

The gong was accepted by IGGY POP who sent a video message.

The ceremony will be broadcast on Sky Arts TV this Wednesday (12th) at 8pm.

For more details and information on the 2-hour TV broadcast, please visit tv.sky.com 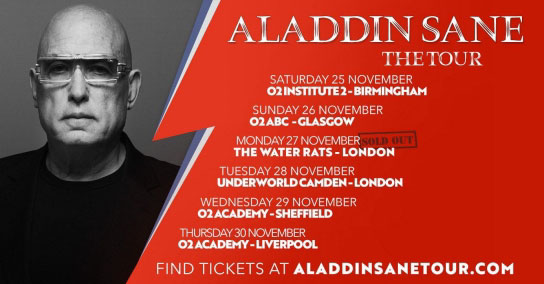 The dates announced are as follows:

For more details and tickets, please visit the aladdinsanetour.com website.

New book scheduled for publication in September is WHEN ZIGGY PLAYED THE MARQUEE: David Bowie's Last Performance as Ziggy Stardust by TERRY O'NEILL.

When Ziggy played The Marquee Club in Soho, London, in October 1973, most of those invited to the small venue did not realise that this would be the last performance David Bowie would ever give as Ziggy Stardust. Terry O'Neill, celebrated photographer, was given unprecedented access to document the event. O'Neill captured Bowie and his crew backstage as they went through costume changes, and Bowie transformed into the character he'd soon put to rest. On stage, dodging television cameras and lights, O'Neill snapped the incredible stage presence for which Bowie and his crew had become renowned. O'Neill remembers of Bowie: "He became a character on stage. As much as a person takes a role in a play for the West End or on Broadway, learning the lines, putting on the costumes - this was, I think, the way Bowie treated his stage. This night at the Marquee, I witnessed a modern-day Hamlet - and it was Ziggy Stardust". Foreword by Gary Kemp.

About the Author: Terry O'Neill has had a star-studded career. He has been in the business of capturing the most iconic, candid, and unguarded moments of the famous and infamous for six decades. His reportage photography chronicled the evolution of fashion in the postwar era, and later the emergence of bands such as The Beatles, The Rolling Stones, and The Animals, and icons like David Bowie and Elton John. He has been photographer-of-choice for a multitude of celebrities, from Frank Sinatra and Audrey Hepburn to Raquel Welch and Paul Newman, and remains the only photographer to have captured shots not only of every James Bond to date, but also more than 25 Bond girls and a staggering 150 Oscar-nominated actors and actresses. O'Neill was awarded with the Royal Society of Arts' highest honour, the Centenary Medal, in 2012.

You can pre-order When Ziggy Played the Marquee

Showing at the Edinburgh Fringe Festival is From Ibiza to the Norfolk Broads at Forth - Pleasance Courtyard, Edinburgh, Scotland at 1:55pm.

ADRIAN BERRY's hugely acclaimed hit show tells the tale of a young DAVID BOWIE obsessive on a thrilling journey in the footsteps of his obsession, leading him to discover some long-hidden truths. What follows will change his life forever. Powerful and emotional, music and magic realism collide in this darkly funny and moving production featuring Alex Walton. The life of the pop fan is brilliantly dissected in this tale of unnatural teenage wildlife. 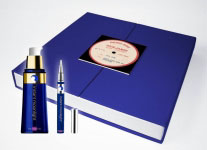 The original 1994 much-in-demand Bowie collectors biblical discography has now finally got a complete makeover with this one-off special limited deluxe edition due this month.

- Addendums with dozens of records that weren't featured in the first edition, including many never seen before acetates.
- Most records now photographed in COLOUR.
- 1st printing in a strictly limited deluxe edition.
- A4, 180 pages, hard cover, gloss finish plus jacket, heavy 180g gloss paper.

Each copy will be numbered and signed by the authors with a personalised dedication.

The ONLY way to obtain this special limited deluxe edition is via a special gift deal from MATOXINE - the makers of 'Instant Moonlight' - a revolutionary new cosmetic range developed from the venom of the David Bowie spider.

You will also receive a unique deluxe box, on the cover of which the Instant Moonlight' logo is replaced by a picture of the label of the holy grail David Bowie 7" original acetate of 'Liza Jane', the first David Bowie ever from 1964. The box is also designed to store 7" records.

The box will contain one click-pen of 'Instant Moonlight' plus platinum with applicator and one instant moonlight gold dispenser, for woman or man. Ideal for the handbag or travelling.

To snap up one of the remaining copies please visit indiegogo.com and scroll down to $75 USD - collector's box with 7" book option - where you can order the book now by clicking on the pink 'GET THIS PERK' button.

(Ed. If you are wondering why the company is sponsoring this book, it's because the President and CEO Doctor Reto Stöcklin is a HUGE long-time Bowie fan and collector).

Update: #1
Dear all, we are glad to inform that the book can now be ordered via PayPal. Some of you couldn't buy it because the platform suddenly changed its rules to accept credit cards only. We also had a few requests for split payments, and we are flexible here for those of you who need some time. You can now contact us directly through a dedicated email: with any enquiries.

Alternatively, if you are a Facebook user you can also get in touch via their Closed Group David Bowie World 7" Records - simply click on JOIN GROUP and you will be added.

For those of you who use FACEBOOK - check out the DAVID BOWIE Wonderworld Group.

Feel free to join and add yourself. You never know what might get posted...

Portraits of an Artist as a Young Man' by GERALD FEARNLEY.

This publication collects original and rare photographs from Bowie's debut album shoot, which were released for the first time as fine art prints in 2016. These pictures show Bowie pre-fame, pre-Ziggy Stardust, as a young man unaware of what the future holds A glimpse at the origins of a late great pop-music icon.

Alongside the famous album shot are many completely unknown, unpublished and sought-after 'buried treasures' which were taken at Fearnley's studio in a basement beneath a church in Bryanston Street, near Marble Arch in London. They show a playful side to Bowie 'clowning around' in a superhero jumper, with face paint on, laughing and smiling while throwing shapes.

The link between the two men is Gerald's brother 'Dek', who was the bass player of Sixties band The Buzz. They backed Bowie in 1966-1967 and also featured on his first album. The whole of The Buzz and Bowie & co. would stay at Gerald's house, where they would prepare before their gigs. Bowie often also went there alone to write songs.

Now - fifty years since the original photo session and release of David Bowie's debut album - the unseen photos of Gerald Fearnley are presented here for the first time. These whimsical, youthful images capture the artist as a young man only a few years before he'd transform himself into Ziggy Stardust and launch a career that would become one of the most successful and influential in the history of modern music.

This 80-page hardback publication is sized at 230 mm x 190 mm, with illustrations: 10 colour, 80 black and white and is published via ACC Art Books.

About the Author: Gerald Fearnley is a professional photographer, famous for capturing the front cover shot for Bowie's debut album, David Bowie, in the '60s. The friendship between the Fearnley family and Bowie meant that Bowie spent a lot of time at Gerald's house in Worcester Park, Surrey, both preparing for gigs and writing songs.

You can pre-order Bowie Unseen: Portraits of an Artist as a Young Man