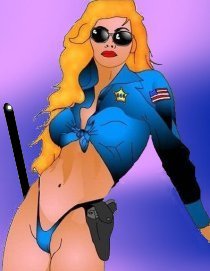 KelMarSuperVixen's Fear and Loathing in Manhattan...

Well folks, the first of hopefully many Sailor shows passed and even though it was only two songs, once it was over I felt like I'd been through the ringer. You know that feeling? The one you get after your first show of a new Bowie tour? Yea, that exhausted bliss that only cold cocktails and chocolate can enhance.

Or an assload of pot... whatever floats your boat, baby!

This is not just few notes for those of you who didn't make it. I'm not going to bother to tell you what it sounded like, who was there, or how long they played. You know that already.

Nope, this is guide of the New York show experience. A sort of How-To Guide if you will.

Firstly, if you decide to do any shows in the US it HAS to be NYC. New York is all that you've heard about it and more. NYC is a living, breathing entity that takes you in like a good old movie and stays with you forever like a good pair of jeans should. There's a reason people say "I *HEART* New York," and it's not because everyone hates it.

Plus- it has more bars, awesome stores and wacky people per square inch than anywhere else in the world. Wacky and mostly harmless people, I should add. And every last one of them has a story you might actually want to hear.

Okay, so you've decided you'll do NYC as your US Bowie experience. You'll need clothes. I highly recommend you take every last black article of clothing you own and then go buy some more. There are several reasons for this so I shall list them for your convenience:

1) Dirt doesn't show on black garments. That's a bonus! Especially if you're out with the likes of a NYC crew on a bender at 4 am... falling down (or out of a cab, as good old KelMar is spectacularly famous for) is almost de rigueur at this point. At least there won't be any evidence of your mishap- unless you fall in a big pile of white dirt, it won't show up!

2) Despite what you see in the shop windows, there simply IS no other color of clothing in the entire city (except maybe the Bronx, where apparently navy and dark gray are also acceptable).

3) Everything will match, so no outfits look funky like that time you tried to force purple and orange together as they were the last things in your suitcase!

4) If you wear any other color, someone might have you arrested for the Black Is the Only Color Law as alluded to in number 2.

5) If you need to pull a heist, black is a good color for robbing. You might not know this, but stuff is quite expensive in NYC... but we'll get to that in a moment. Suffice to say that if you DO run out of money, robbery is almost legal in most big US cities. Provided your gun is registered and you voted republican.

So that's the clothes... Now what accessories should I bring, you ask? Just black (duh!) sunglasses. Even though in downtown Manhattan the sun is constantly blocked out by the buildings, you MUST wear sunglasses during the day. If you bump into a large skyscraper because it is so dark, don't worry! You've got black on remember? Who'll see any dirt?

What about some dinero? Cash is good but credit cards are better. And the better the metal, the better the card... A titanium card is great, platinum is good, a gold card is basically like having welfare in NYC. Everyone and their unemployed cousin has a gold card. And should you have the latest Visa Plutonium/Moonrock Card, man - you should whip that out at least fifty times a day with a great big flourish, like Zorro or some shit.

Oh and don't bring anything but the latest in cell phones. New Yorkers pride themselves in having the newest phone. If yours is more than 15 minutes old, it's laughable to them. And be sure to arrange to have someone call you when you're shopping on or around Fifth Ave. Preferably when you're in a swell store like Saks, Barneys, Bergdorfs or maybe even Macy's if you're running low on dough.

Eating out is an experience, too. It is your SuperVixen's firm belief that restauranteurs in NYC actually make up words for things on the menu. No one yet has been able to tell me just what Arugula is... And instead of just calling the dish "spaghetti," it's gotta be wheat fuzilli pasta smothered in sun dried tomato hot gazpacho and andouille pate sauce. WTF? If it's Spaghetti Bolognese, JUST SAY SO! But don't be intimidated, it's all the same normal stuff that we eat, it's just dressed up with $6 words. That, of course, is why food costs more there. They had to buy a bunch of words for it before they could sell it to you.

Okay, so you're dressed, you've impressed everyone with your credit line and cell phone and you have had a nice meal... Now what?

* Bars don't close till 4 am so pace yourself. Just a warning! It's bad form to get drunk early.

* Cab drivers are NOT out to screw you. They're actually pretty honest. Just don't look out the windscreen when they're driving. They only know two speeds - stop and STEP ON IT. It looks scarier than it really is.

* Saturday nights on the town are horrible because everyone from the foreign country of New Jersey (state motto: Our girls have the biggest hair in the world!) make a religious pilgrimage to Manhattan just so they can pretend like they are from NYC. You'll know them when you see them, however, the women have hair like bad beauty pageant contestants and the men wear white trainers with black straight leg jeans. When you see them, RUN. I hear that boring is actually contagious in New Jersey.


Now that we've covered most of the important stuff, you should be ready! If and when Sailor decides to actually PLAY this new stuff in front of people, you'll be styling and profiling!

Please come to NYC for your Bowie Experience. Not only would I like to meet you, but you won't regret taking the time and effort to see NYC as you would if you decided on the Atlanta gigs or something! At least Mahattanites know how to read. ;)

Shine on!
xoxoxo
Your Pal