BOWIE AT THE BEEB by Spaceface

Can you bear another of my ramblings? Thanks for all the nice emails about my New York journal. I love to write them, but it's very nice to know that you like to read them too.

After the delight of that Friday gig in New York, I couldn't believe I was to have another chance to see David live so soon afterwards, and in such a small venue!

It was slightly bizarre to meet up with so many of the same people I had seen only the week before on the other side of the world! I suggested that we meet in Hong Kong next week, and Prague the week after, but somehow I don't think those cities will have quite the same attraction.

We had been told we need not arrive early, as our seats were guaranteed, but in fact most of us were there a couple of hours beforehand. What strange magnet drew us on, do you think?... lol. It was great to meet up with Spud at last. He only lives about 10 miles away from me, but our db experiences have never crossed paths until now. He is such a giggle, and keeps the message boards entertained with funny stories. Don't miss his posts.

By 7.00pm we were all waiting patiently outside, and filed obediently into the hall. Everyone was dressed in their best bib and tucker, including me... lol, so I hope we did you justice, David. As we entered the gig, the reality of what we were about to see sank in. The place was tiny! The stage was almost on the level! We would be able to see right into David's eyes!... Gawd!!!!!!

We were treated to some pep talks from the warm up man. It was very funny actually. He exhorted us to make as much noise as possible, and to clap above our heads so the camera could see, and also to dance around if we wished. Well, he had reckoned without a room full of Bowie maniacs. We just about blew his toupee off with our first try out. I could see the surprise in his eyes as he realised he would have more trouble keeping us in our seats than getting us out of them. Then came a rather pompous little speech from some BBC bigwig ( all right Steph, I know I should know who he was), and then nothing more to wait for but the lights to go down...

I don't know about you, but the moment the band hits the stage is always one of the most thrilling moments in a gig for me. The collective burst of ecstatic applause and the end of the anticipation stirs the soul in a unique way. David again looked impossibly cool, in a white shirt and dark suit with fabulous square heeled black shoes. The opener was Wild Is The Wind, and the audience were with him every step of the way. The rapport between the audience and David filled my eyes with tears twice! (old soppy git that I am). We were on our feet for the whole song, of course, but David asked us to sit down afterwards, and had to pull his best schoolmarm impersonation to get compliance! We were up and down like yo-yo's after that, and eventually he gave up trying to get us to sit down... lol

Once again, you have seen the set list, but what a set this is! Quite, quite impossible to believe that you are hearing those massive, stadium filling hits in a gig the size of your local pub!

Whenever David moved to the front of the stage, it was quite a shock to the system to see him so close up, almost like we shouldn't be allowed to be that near and should step back. Wonderful, but forbidden, like all life's great pleasures... I had that same feeling at Newcastle Riverside, Earthling gig (capacity about 800), when I had only previously seen David in 50,000 plus stadiums. If this progression continues we will be on his knee next time! (bags I first!... lolol)

David chatted quite a bit in between the early songs, doing Norman Wisdom and Blue Velvet impersonations. "You lot probably don't know who Norman Wisdom is" he said. He was quickly shouted down. "Where does he live then?" "The Isle Of Man" someone called. Any more obscure and wacky questions, David? If I had had to swot up on potential subjects for discussion at this gig, I don't think the home town of an ancient British comedian would have been one of them... hahahaha.

As an introduction to Always Crashing In The Same Car, he told the anecdote about the old car bought for him by Coco and Iggy in Berlin. He said he had been out of his head on drugs, one particular day, and was convinced his dealer had ripped him off. He spotted the guy, and rammed his car again and again, finally driving off, intending to crash the car and kill himself (erk!). The only trouble was, the car ran out of petrol. Talk about gallows humour!

As the set ran on, we were treated to first class renditions of a quality similar to those seen in New York. I missed the two re-worked 60's songs in New York, so it was a thrill to hear them for the first time. London Boys was achingly cool, and I Dig Everything was transformed into an all out rock fest, with electrifying opening guitar. Together with Can't help Thinking About Me, which we heard at the end of last year, these three point to great success for the forthcoming 60's album. Little Wonder was the song which made everyone forget they were in a TV studio, and stretch out their arms to join in the 'so far away' sing along part.

Having watched Fame on many of David's videos, and seen 50,000 people wishing they could be the one who was pointed at, at the end ('What's your name?'), it was great to know that you were only one of 250 choices... lol, and the band were SO tight on this one! There wasn't quite so much naughty body language this time (it WAS the BBC after all) although we did get a rather wicked straddle of the mic stand in Stay. I looked along the rows during this one, to see our European correspondent jigging along with the rest of the front row, the only difference being that he had the crumbly camera in his hand, and was operating that at the same time!

Those near the front were very lucky to get some flashes of recognition. Well he could hardly fail to recognise some of us by now. Helen2 told me she got a lovely smile, and I actually saw the wink he gave Steph from behind his long hair. The lights made his eyes glitter and seeing that wink was a very startling, shivery experience. Steph and I exchanged glances afterwards - a sort of mutual, knee-sinking... ohhhhhh. Near the end of the set, Straffer came to the front of the stage, and gave David some flowers. He leaned down and kissed her and thanked her by name (Bettina). It was quite moving to watch, and she had a little weep herself.

I think there were a fair few tears shed all around the room that night. Right set of weepy tarts we all are! She and Zimmo (both stalwarts of the chatroom) had travelled to London together.

As you have heard, David really wasn't too well, and he had a large collection of drinks and inhalers to which he resorted now and then. When he was telling his jokes and anecdotes, you could hear a chesty sound in his voice, and also that he was short of breath. Then he would launch into another wipe out rendition of a major classic, and miraculously, he still sang like a bird! He made fun of his illness though, and encouraged us to join in teasing him about it, pulling sad faces to elicit 'awwr's' from the audience, which we very much enjoyed!

The last three songs of the main set, were the best, musically, for me. Hello Spaceboy, Cracked Actor (joy and ecstasy: That line, 'crack baby crack, show me you're real', is one of David's most succinct lyrics. No comment on the 'suck baby suck' part... grin), and I'm Afraid Of Americans, once again, a tour de force.

He changed into a yellow T-shirt for the encores, and re-appeared leaning on the door and listening to Gail introducing the band. I have to say that at first glance he looked startlingly feminine, although still all man! I adore the challenges his new appearances pose to us, and this one is definitely the most radical for some time. Spaceboy said to me, last weekend, that liking David means you don't have to waste time buying any other artists music. David has covered all styles, and his appearance has changed so often, its like owning a very diverse record collection! Personally, I think he is looking hugely attractive at the moment. Hehehehe... you just NEVER know what he is going to do next!

By the time the encores began he was obviously feeling the strain, and had several goes at Ziggy Stardust. We got an insight into the perfectionist David here, and could imagine how rehearsals must go. He had said at the beginning of the set that he would stop and start again if he needed to, 'because they can 'fucking' edit it out'... he drew a big audience giggle here. After Ziggy, he seemed to find another gear from somewhere and finished the set with his customary finesse. The grin factor was huge on Starman! Band and audience lapping up the nostalgia and pure pop pleasure. By the time that freaky new version of Let's Dance had ended, we were feeling the pain for him, and glad he was going to be able to rest, although of course, as always, sorry it was over. 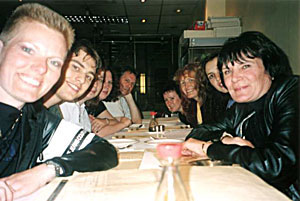 We had a few drinks together afterwards, and then another quick look back at the venue, before going down to China Town for a late night farewell meal. At the venue, we were very lucky to catch David leaving! Even though he must have been feeling wiped out, he smiled and signed some autographs (Spidey and Don got their first one!).

This would be the last chance to see David live for quite some time, and there were one or two heavy hearts. We have such a lot to look forward to, though, what with Live and Well, the 60's project and the Visconti project. AND, of course, the return with a vengeance of that impostor, sailor, to the message boards and chat room! I logged on today, and even from his sick bed, he has been posting away like mad... hehehehe. If he isn't careful, he will receive his own phone call...

Once again, thanks for this spectacular, throat closingly (no pun intended..lol) lovely, intimate performance. It was one of those nights which will 'flash upon the inward eye' for months and months to come.

See you all next time