There are several DAVID BOWIE programmes on TV tonight...

Check out the BW Monthly Planners [view] to see what else is going on.

The exhibition ROCK 'N' ROLL WITH ME - BOWIE / MACCORMACK 1973-76 reopens this month at Brighton Museum and Art Gallery.

The exhibition will now run from 18th May through to 23rd January 2022.

The photographs will be complemented by a short film never seen before in the UK, shot by Bowie on their trip to Moscow in 1973, music videos of Bowie and MacCormack on stage together, film excerpts and music in the galleries.

Note: Tickets are on sale NOW for dates up to 20th June.

Check out the ITV News report from itv.com news website.

DAVID BOWIE - THE WIDTH OF A CIRCLE

THE MAN WHO SOLD THE WORLD ALBUM PICTURE DISC

RELEASED 28th MAY ON PARLOPHONE 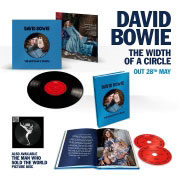 Last month saw the 50th anniversary of the original UK release of The Man Who Sold The World, David Bowie's landmark entry into the 1970s. The album began the collaboration with guitarist Mick Ronson that would continue with such Bowie classics as Hunky Dory, Ziggy Stardust and Aladdin Sane.

The 2020 re-release of The Man Who Sold The World restored the album's intended title Metrobolist, while featuring a new mix by original producer Tony Visconti. Taking its name from the album's opening track, which was named after a painting by Bowie's friend George Underwood, the new two-CD set The Width Of A Circle acts as a complementary piece to that album. Its 21 tracks feature non-album singles, a BBC In Concert session, music for a TV play and further Visconti remixes wrapping up David's recordings from 1970 and revealing the first sonic steps toward Hunky Dory.

Also released on 28th May is a picture disc version of The Man Who Sold The World album, featuring the striking black and white imagery of the 1972 reissue.

DAVID BOWIE - THE WIDTH OF A CIRCLE

Performed by David Bowie and The Tony Visconti Trio (a.k.a. Hype)

CD 2:
THE LOOKING GLASS MURDERS AKA PIERROT IN TURQUOISE:

The Prettiest Star (Alternative Mix)
Single mix released on 6th March, 1970 on Mercury Records MF 1135. This is the unreleased alternative mix created for promotion in the US market.

London Bye, Ta-Ta*
Originally recorded and rejected as the follow up single to 'Space Oddity'. This mono mix was finally released on the Sound + Vision box set in 1989.

London Bye, Ta-Ta (1970 Stereo Mix)*
This stereo mix of the above remained unreleased until the reformatted reissue of the Sound + Vision box set in 2003, replacing the mono mix.

Holy Holy*
This non-album single A side, backed by the album version of 'Black Country Rock' from The Man Who Sold The World album, was released on Mercury Records 6052 049 on 15th January, 1971.

Waiting For The Man
The Width Of A Circle
The Wild Eyed Boy From Freecloud*
The Supermen (Bowie At The Beeb vinyl only)*
Performed by David Bowie and Hype.

THE WIDTH OF A CIRCLE 10" SINGLE and 96/24 digital E.P.
Available only from the official David Bowie store.

You can pre-order the The Width Of A Circle 2-CD set and The Man Who Sold The World picture disc album.

For those of you who use FACEBOOK - check out the private DAVID BOWIE Wonderworld Group.

I am not personally adding peple, but do feel free to join and add yourself. You never know what might get posted...

Five years after DAVID BOWIE's passing, we are trying to gather fans' personal stories of 'THE DAY BOWIE DIED' and publish them all together in one book.

Where and how did you hear the news, how was it for you, how were the days that followed and to what extent has Bowie still played a part in your life over the last five years? - so your story from 'that day'.

If you are interested in contributing your story to the book, please email it to

We are looking for 100 stories and closing date for submissions is 16th April 2021.

ALL proceeds will be donated to the Bowie Bandstand Restoration Appeal in Beckenham.

• THE MAN WHO SOLD THE WORLD picture disc LP, released on 28th May - more details

• DAVID BOWIE - THE WIDTH OF A CIRCLE four track 10" vinyl with 2020 mixes, released on 28th May - only available via the official David Bowie Store.