On this day, 46 years ago, DAVID BOWIE had this rather debonair mugshot taken by the Rochester Police Department when he appeared at the City Court for arraignment.

The 5x4 inch photograph was found and rescued by Gary Hess from the trash during an estate sale of a retired Rochester police officer. It was later auctioned on eBay and realised $2,556 (£1,247.44 GBP).

The picture was taken four days after David was arrested, along with singer James Newell Osterberg, Jr. (aka Iggy Pop), bodyguard Dwaine A. Vaughns (22), of Brooklyn and Chi Wah Soo (20) of Rochester on drug possession charges.

The four were arrested at 2:25 a.m. in a three-room suite in the hotel at 70 State Street by four city vice squad detectives and a State Police investigator. They were all charged with fifth-degree criminal possession of marijuana. Police said they confiscated what they described as about half a pound of marijuana (182 grams). The charge was a Class C felony, carrying a maximum sentence of 15 years in prison.

They were busted at the Americana Rochester Hotel and held in the Monroe County jail for a few hours before being released. David's $2,000 bail was ordered in cash, and $2,000 in bond was set for the others.

David pleaded innocent in court and was eventually found not guilty by the Rochester City Court.

On this day, 35 years ago, DAVID BOWIE held a press show at the Piper Club in Rome, Italy to announce his upcoming Glass Spider World Tour and new album in 1987.

Two songs Bang Bang and '87 And Cry were performed, along with a 20 minute Q&A from the press.

Over on the MAINMAN website: Podcast episode #51 is now available...

You can listen to the fifty-first podcast now - in this episode BARRIE WENTZELL recalls photographing DAVID BOWIE in his Ziggy Stardust persona in January 1972.

On this day, 37 years ago, DAVID BOWIE was the special surprise guest of TINA TURNER on her Private Dancer World Tour.

On the 23rd March 1985 at the National Exhibition Centre in Birmingham, David and Tina duetted on three songs 'Tonight' and a 'Let's Dance' medley, which started off with the Chris Montez 1962 song of the same name, which then segued into David's own mega smash hit.

The show on the 23rd was filmed and recorded for a HBO special and future video release.

What has not been mentioned over the years, is the fact that David also turned up the NEXT evening (24th) and performed the same songs.

Want proof? Listen the recording of 'Tonight' performed on the 24th via tinaturnerblog.com - as you can hear it is completely different.

For those interested in the upcoming 2022 TV series of THE MAN WHO FELL TO EARTH you can watch the first five-minutes of the show below...

This 2022 adaptation based on the Walter Tevis novel and the iconic 1976 film that starred DAVID BOWIE will follow a new alien character (Ejiofor) who arrives on Earth.

The series premiere on 24th April in the US on SHOWTIME. 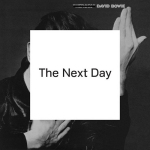 • On this day, 9 years ago DAVID BOWIE released his The Next Day album.

digital and then later the Exclusive Japanese Blu-spec CD2.

If you never bought this album, it would make complete sense to purchase the later November 2013 release The Next Day Extra

• On this day, 57 years ago, DAVID BOWIE (aka Davy Jones) performed his first ever musical television appearance with The Manish Boys, when they appeared on 'Gadzooks! It's All Happening', which aired on BBC2 on March 8th 1965. The band performed their debut single 'I Pity The Fool'.

In the Radio Times dated 8th March 1965 it stated: The Producer of Gadzooks, Barry Langford, is taking great care to keep his show up to date. "I'm not booking far ahead," he explains. "I'm waiting to hear the releases before I engage the artists. The scene is changing so fast that some of the guests will come as a 'complete surprise.' Davy Jones and the Manish Boys, who are appearing tonight, are likely to come into this category."

Little known outside the London clubs, they cut their first disc on March 5th, and their main claim to fame at present is that they have produced another 'new sound.' It is the 'sax sound,' and the group contains two tenor saxophones (one played by Davy Jones himself), a baritone sax, a lead guitar, bass guitar, organ, and drums. All the boys come from Maidstone in Kent - except for eighteen-year-old Davy, who hails from Bromley.

David's then manager Les Conn got some excellent wide press coverage with a spoof publicity story about the BBC not allowing David to appear on the show without him first getting his hair cut.

The story, some complete with photos David in a hairnet got national coverage and appeared in The Daily Mail, The Daily Mirror, Daily Telegraph, The Sun and local press Kent Messenger.

For those of you old enough not to remember... 'Gadzooks! It's All Happening' was a sequel to producer Barry Langford's 'Beat Room' and offered top pop acts as well as the dance troupe The Beat Girls. The show presenters were Alan David and Christine Holmes. The title changed five months or so later to 'Gadzooks! It's the In Crowd' when I'm reliably informed that Lulu co-presented the show for a short while. Later it was shortened to just Gadzooks! Alas no known shows are thought to remain in the BBC archives.

Oh and here's one for the real trivia buffs out there... actor Robert Powell's wife was one of the original Beat Girls dancers.

Sad news to read that CALVIN MARK LEE has passed away, aged 85.

Calvin worked for Mercury Record Productions (A&R) in 1969, and was responsible in helping DAVID BOWIE get a recording contract.

• On this day, 45 years ago, IGGY POP along with DAVID BOWIE on keyboards and backing vocals, performed in Ardwick, Manchester, England at the Apollo Theatre during The Idiot Tour in 1977. The band also consisted of Ricky Gardiner, with Hunt and Tony Sales. The support band were The Vibrators...

• On this day, 46 years ago, DAVID BOWIE performed at the International Amphitheatre in Chicago, Illnois, US during his 1976 'On Stage!' World Tour...

• On this day, 52 years ago, DAVID BOWIE & HYPE performed at The White Bear public house, location of the Hounslow Arts Lab, run by Dave Cousins of Strawbs, in Middlesex, England in 1970. Also on the bill were Seasoning with Maggie Nichols...

BRILLIANT ADVENTURE E.P. and TOY E.P. (YOU'VE GOT IT MADE WITH ALL THE TOYS), both feature unreleased versions, live tracks and mixes.

The BRILLIANT ADVENTURE E.P. has four previously unreleased tracks from the 1.OUTSIDE era.

- 'JOHNNY DOWNLOADER' is an early version of 'I'M AFRAID OF AMERICANS' recorded during the sessions with Brian Eno for the album and mixed in November 1994.
- An alternative single mix of 'I HAVE NOT BEEN TO OXFORD TOWN'.
- Two live tracks: 'A SMALL PLOT OF LAND' and the Jacques Brel cover 'MY DEATH'. Both songs were performed by Bowie and pianist Mike Garson at a fundraiser for the New York Public Theater at the Shakespeare Festival in New York on 18th September, 1995.

• Upcoming at OMEGA AUCTIONS this month are: 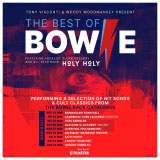 The band perform iconic hits and cult classics from Bowie's extensive back catalogue at nine special shows with Visconti on bass. One of the world's most celebrated producers, Visconti played on Bowie's first two records and went on to produce ten of David's albums throughout his career. Drummer Woody performed and recorded with Bowie during his Ziggy Stardust era. They are joined by Gregory on vocals, Paul Cuddeford and James Stevenson (guitars), Tony's daughter Jessica Lee Morgan (12-string and sax) and the very talented Janette Mason on piano/keys.

If you were lucky enough to catch these accomplished musicians on tour as Holy Holy, you will know that the band really bring the magic of Bowie to life, with an intoxicating mix of adoration and respect for their old friend and fellow band member. The delivery of these songs effortlessly capture Bowie's spirit and audiences are positively enraptured!

Tickets for shows are available via premier.ticketek.co.uk

For more details and information, please visit the holyholy.co.uk website.

Update: Woody Woodmansey will not be appearing on this tour. Statement published on their website: "We are sad to say that due to what can only be described as 'medical differences', Woody will not be with us on our UK tour this March. We are all disappointed but respect his decision, and are pleased to welcome Steve 'Smiley' Barnard to the band.".

• WE COULD BE... BOWIE AND HIS HEROES by TOM HAGLER, consultant editor TONY VISCONTI, paperback version, 400-pages, published on 7th July - more details

• DAVID BOWIE - ALL THE SONGS: The Story Behind Every Track by BENOÎT CLERC, hardcover, 624-pages, published on 14th April - more details

Exclusive DAVID BOWIE lino-cut print available to PURCHASE - don't hang around, these are ALL the remaining original left-over stock from 38 years ago, once they've gone, they've gone!