Check out the latest DAVID BOWIE - ALBUMTOALBUM podcast, it's well worth listening to.

Join Arslan and Nick Pegg for the fourth and final part of the 198more show, an all-singing, all-dancing odyssey through the wildly underrated Bowie 80s. In this part, they address post Live Aid Bowie, his work with Iggy Pop, Tina Turner, Jimmy Murakami, Martin Scorsese, La La La Human Steps and a fellow called Reeves Gabrels, who would play a huge role in reorientating our hero with his muse, as the 90s loomed.

You can listen in here at audioboom.com

Highlights from their Music Memorabilia (Day 1) and Rare and Collectible Vinyl Records (Day 2) include:

You can view all the Bowie items and register to bid over at the omegaauctions.co.uk website.

• On this day, 31 years ago, DAVID BOWIE performed at the Jordal Stadion, in Oslo, Norway during his Sound + Vision Tour in 1990...

• On this day, 34 years ago, DAVID BOWIE performed the first of two gigs at the Rosemont Horizon, in Chicago, USA during The Glass Spider Tour in 1987...

• On this day, 52 years ago, DAVID BOWIE performed the two shows at the Catacombs Club, in Wolverhampton, England in 1969...

• Birthday memories of TONY MASCIA (aka Anthony DeMassi) born on this day in 1933-1991. Former pro boxer, DAVID BOWIE's driver/security and 'Arthur' in The Man Who Fell To Earth movie...

Over on the MAINMAN website: Podcast episode #43 is now available...

You can listen to the forty-third podcast now - in this episode MainMan founder TONY DEFRIES recalls more highlights from 1971 including Andy Warhol and Iggy Pop.

To be released at the end of this month is JUST A GIGOLO on Blu-ray, this limited edition also includes a companion media book and original soundtrack CD.

Paul von Przygodski (David Bowie), a young Prussian gentleman, arrives in the trenches in time to be caught in the final explosion of the Great War. After recuperating in a military hospital, where he is mistaken for a French hero, he returns to Berlin. His family home has been turned into a boarding house, his father (Rudolf Schundler) is paralyzed, and his mother (Maria Schell) is working in the Turkish baths.

Attempting to find a new purpose, his childhood friend, Cilly (Sydne Rome), abandons him for fame and fortune; his former commanding officer, Captain Kraft (David Hemmings), tries to persuade him to join his right-wing movement and a widow, Helga von Kaiserling (Kim Novak), briefly seduces him with the finer things in life.

In a society where the individual comes first and anyone can be bought, he is recruited by Baroness von Semering (Marlene Dietrich) as one in her regiment of gigolos. The cynical and decadent world of entertaining rich widows leads an increasingly disillusioned Paul to a poignant, chilling end.

Just A Gigolo Blu-ray is released on 30th August and is available to pre-order now.

Over on the MAINMAN website: Podcast episode #42 is now available...

You can listen to the forty-second podcast now - in this episode MainMan founder TONY DEFRIES recalls working with Motown legend Stevie Wonder in 1971.

On this day, 50 years ago, DAVID BOWIE recorded 'Life On Mars?' at Trident Studios in Soho, London.

David Bowie: "This song was so easy. Being young was easy. A really beautiful day in the park, sitting on the steps of the bandstand. 'Sailors bap-bap-bap-bap-baaa-bap.' An anomic (not a 'gnomic') heroine. Middle-class ecstasy.

"I took a walk to Beckenham High Street to catch a bus to Lewisham to buy shoes and shirts but couldn't get the riff out of my head. Jumped off two stops into the ride and more or less loped back to the house up on Southend Road.

"Workspace was a big empty room with a chaise longue; a bargain-price art nouveau screen ('William Morris,' so I told anyone who asked); a huge overflowing freestanding ashtray and a grand piano. Little else.

"I started working it out on the piano and had the whole lyric and melody finished by late afternoon. Nice.

"Rick Wakeman came over a couple of weeks later and embellished the piano part and guitarist Mick Ronson created one of his first and best string parts for this song which now has become something of a fixture in my live shows."

The original working lyrics written by David for Life On Mars? ended up with more than a few changes...

There's a shoulder-rock movement and the trembling starts
And a great Lord sighs in vain
What can you buy when there's no one to tell you
What a bargain you made
Is there life on MarsJust a worker and his dog in the pink light
Just a savage on half-time
What can he see when there's no one to turn to
For the opposite side
Is there life on MarsJust a laugh and a line
Just joke of the time
It's an evergreenJust a book and a pen
And the biggest amen
That you've ever seenJust a kiss in the face of a sub human race
It's an evergreen
And I'm looking at you while you're looking for ?
And I'm looking at you while you're wondering which record I made

• Memories of DAVID BOWIE's father HAYWOOD STENTON JONES who sadly passed away on this day in 1969, 52 years ago...

• On this day, 19 years ago, DAVID BOWIE performed at the Molson Ampitheater, in Toronto, Canada during the Arena: Two Festival in 2002...

• On this day, 24 years ago, DAVID BOWIE performed at Rock City in Nottingham during his Earthling World Tour in 1997...

• On this day, 31 years ago, DAVID BOWIE performed at Milton Keynes Bowl, Milton Keynes during his Sound+Vision World Tour in 1990...

• On this day, 41 years ago, The Elephant Man play opened at the Blackstone Theatre in Chicago starring DAVID BOWIE in the lead role as Joseph 'John' Merrick in 1980...

• On this day, 56 years ago, DAVIE JONES AND THE LOWER THIRD performed at The Cliftonville Hall, Margate, Kent in 1965...

BOWIE, CAMBO & ALL THE HYPE traces the extraordinary and pivotal friendship between DAVID BOWIE and drummer John Cambridge, from the time when Bowie made his first major career breakthrough in 1969 to his death from cancer in 2016.

John 'Cambo' Cambridge lived with Bowie at Haddon Hall when he had his first hit record 'Space Oddity' and toured with him in Junior's Eyes. He was there when Bowie lost his father, passed his driving test and played his first Glam Rock gig with Hype, even acting as best man when Bowie married Angela Barnett in 1970. And if John had not persuaded his former Rats colleague Mick Ronson to join Bowie in February 1970, there might never have been a Ziggy Stardust or the stellar career which followed.

In Bowie, Cambo & All the Hype we get a backstage pass to meet the key people and witness the events of those crucial times in a funny, moving, story of a unique friendship that survived the Hype.

Review: 'You were a great player in that early transition from drumming David's acoustic sound to the full-on rock sound that eventually gave birth to Ziggy. You have a big story to tell.' - Tony Visconti.

About the Author: John Cambridge (Cambo) went from being a drummer in bars and clubs to drum with Mick Ronson, Robert Palmer, Marc Bolan and many others. He is known for his musical collaboration and life-long friendship with David Bowie. John was instrumental in introducing Bowie to guitarist and producer Mick Ronson, his friend and colleague from local band The Rats. John subsequently performed many iconic concerts with Bowie, Tony Visconti and Mick Ronson, including the 'first ever Glam Rock gig' with David Bowie's Hype at The Roundhouse in 1970.

You can pre-order Bowie, Cambo & All the Hype NOW! 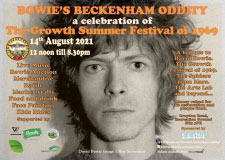 This year's event begins at 12 noon (gates open from 11.45am) and they are pleased to announce the return of some of the Growth Festival folk, including Keith Christmas and Bill Liesegang. Also joining the line-up are Jessica Lee Morgan and Bowiesque.

The full line up, updates and information will be made available in the next few weeks.

Tickets are available now from wegottickets.com website, as well as on the gate on the day of the event.

For more details visit their Facebook page for the latest updates.

• DAVID BOWIE WORLD FAN CONVENTION 2022 takes place in Liverpool over three days next year on 17th/18th/19th June 2022. Some weekend tickets still available, once gone they WILL NOT be adding more - more details

• DAVID BOWIE - ALL THE SONGS: The Story Behind Every Track by BENOÎT CLERC, hardcover, 624-pages, published on 25th November - more details

• WE COULD BE... BOWIE AND HIS HEROES by TOM HAGLER, with consultant editor TONY VISCONTI, hardcover, 400-pages, published 19th October - more details