• On this day, 46 years ago, DAVID BOWIE released his Low album. Recorded in France at Chateau d'Herouville studios, located in the Val d'Oise département near Paris. 'New Music: Night And Day' was the original title and initial RCA Canadian cassette tapes made it onto the market with that title printed on the tape before quickly being pulled. The advertising blurb for the album release stated: 'Two sides of Bowie you've never heard before.'...

• On this day, 57 years ago, 'Can't Help Thinking About Me' was the first solo release from DAVID BOWIE after changing his stage name. Released on the Pye label (Pye 7N 17020) it was backed by 'And I Say To Myself', both tracks were produced by Tony Hatch...

• On this day, 58 years ago, DAVID JONES & The Manish Boys audition for Rocky River Promotions at the London Palladium for possible bookings at the Star-Club in Hamburg. Unfortunately, they don't receive an offer to perform there... 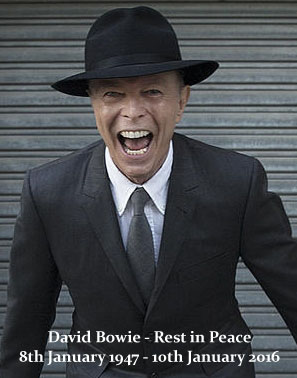 This way or no way
You know, I'll be free
Just like that bluebird
Now ain't that just like me
BOWIE AND BEYOND PODCAST
9th January 2023

Check out the brand new podcast 'BOWIE AND BEYOND' by KELVIN ANDREWS.

Episode 1: Beginnings and The Birth of Ziggy.
Kelvin Andrews explores the early years and influences of David Bowie. From Bromley to Ziggy via Little Richard, Quatermass and New York City. This is Bowie and Beyond, with contributions from Woody Woodmansey, Kris Needs, Tony Zanetta, and Carole Blundred.

The official music video for DAVID BOWIE - THE JEAN GENIE has been upgraded to 4K.

Filmed by MICK ROCK and taken from Bowie's Aladdin Sane album released in 1973 which turns 50 this year.

Forever and always in our thoughts x

Besides our DAVID, other famous and well known people also born on the 8th January include the following...

Thank you to everyone who helps support the site - it is appreciated more than you'll ever know :)

For those not aware, this web site was first set up as a 50th birthday present for David.

It started life as Little Wonder, then Little Wonderworld on Virgin Net Freespace. The website name was taken from the name of his secret gig at the Hanover Grand in London back in 1997.

I originally wanted the website name BowieWorld, but David and Ultrastar also wanted that name for a special virtual 3D chatroom BowieWorld he was about to launch. I obviously gave in and promised not to register it, and let them do their thing.

They never registered that domain name as it became part of Worlds.com in the end (and neither did I, keeping my promise). Eventually a Bowie fan in New Zealand did register it and put up some fan pages.

I patiently waited for the bowieworld.com site to close, and for the domain name to become available again and then claimed it in 2012.

I don't know why I registered it, I've done nothing with it yet. Let's just put it down to sentimental reasons.

Check out what's on the telly box starring DAVID BOWIE starting tonight and over the next few weeks around the world.

Visit the BW Monthly Planner for January to see what else is happening.

For those of you who use FACEBOOK - check out the DAVID BOWIE WONDERWORLD Group.

Feel free to join in with the other 80,500 plus members, add yourself and invite your Bowie fan friends. You never know what might get posted, or who you might meet...

THE SOUND AND VISION OF DAVID BOWIE
1st December 2023

Tickets are limited and are on sale now.

May all your wishes and hopes come true in this new year.

Be safe, keep well, have fun and be kind.

Love on ya! from Paul (aka Rednik)

• New book FLY IN THE MILK... DAVID BOWIE AND CRACKED ACTOR by SUSAN COMPO and MARK WARDEL to be published by Red Planet Books in the Spring.

• Theatre production LAZARUS written by David Bowie and Enda Walsh, Italian version directed by Valter Malosti to be staged in various cities in Italy. Performances begin in March through to June - more details

DAVID BOWIE - WHAM BAM THANK YOU MA'AM! by IVOR JONES, limited edition of #300, special collector's publication is now sold out. There are some unnumbered copies available which you can purchase at a reduced price - more details

Exclusive DAVID BOWIE lino-cut print available to PURCHASE - don't hang around, these are ALL the remaining original left-over stock from 39 years ago, once they've gone, they've gone!