• On this day, 49 years ago, RCA held a press lunch with DAVID BOWIE as guest of honour at Rules, London's oldest restaurant on Maiden Lane in Covent Garden.

• On this day, 57 years ago, DAVID BOWIE performs his first-ever gig outside of the United Kingdom. David Bowie and The Lower Third play at Le Golf Drouot, Montmartre, Paris, France in 1965...

MERRY CHRISTMAS TO EVERYONE!
25th December 2022 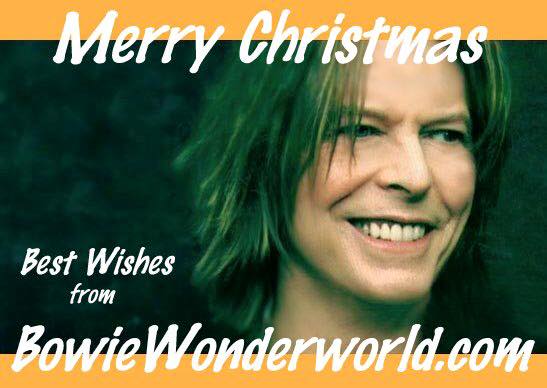 Wishing everyone, everywhere, a very Merry Christmas
Have a Cool Yule! I hope you receive everything you ever wish for
BOWIE ON SNL
15th December 2022

• On this day, 43 years ago, DAVID BOWIE appeared on NBC's SATURDAY NIGHT LIVE US TV show with a legendary three-song live performance.

Former employees of NBC's Saturday Night Live were asked to send in precious anecdotes to GAWKER - one particular piece that stood out was when DAVID BOWIE appeared on the programme in December 1979.

David performed three songs... 'The Man Who Sold The World' where he was carried to front stage by backing singers Klaus Nomi and Joey Arias, whilst inside a costume (which was a nod to Dadaist Tristan Tzara - or if you've done your homework Sami Rosenstock).

The second song was 'TVC15' with Bowie dressed more conventionally as a Chinese airline stewardesses dress and lastly 'Boys Keep Swinging' complete with a puppet body.

Tzara introduced the first performance as follows: "It is the only and greatest three-act hoax of the century. It will satisfy only industrialized imbeciles who believe in the existence of men of genius.".

SNL Employee: David Bowie and I manhandle his life-size plastic punching doll into the elevator. The next night, NBC's costumers will bolt David into this rigid contraption so he can spin and wobble across the stage on live television, while lip-synching one of the songs that made him into the icon known as Ziggy Stardust.

For a second, I gaze into Bowie's left eye and notice his famous blown pupil. "Why drag this all the way back to your hotel? The Props department could lock it up for you."

He laughs. "Nothing personal, but if it goes missing, I can't just buy another one down at the corner shop."

I still look back on this comment as my best shot at the Melonhead Hall of Fame.

Nobody gives us a second glance as we struggle outside to the Plaza. The Thin White Duke and an anonymous melonhead are trying to stuff a six-foot-tall, brightly-colored punching doll into the back seat of a stretch limo, but New Yorkers, true to form, don't even notice this singular tableau. David turns, to say thanks for the help. Polite guy. My brain is churning at light speed, searching for another bon mot.

So I bring out the big guns: "Break a leg!" When David looks puzzled, I rush to explain: "Not now. Tomorrow night." He smiles and thanks me again.

Then his limousine is gone, and I'm left alone to compose my Hall of Fame acceptance speech.

Over on the MAINMAN website: Podcast episode #59 is now available...

You can listen to the podcast now - in this episode MIKE GARSON recalls his audition for the Ziggy Stardust US tour in September 1972.

On this day, 39 years ago, DAVID BOWIE performed 'Imagine' at the Hong Kong Coliseum during his final gig of the Serious Moonlight Tour '83 in memory of JOHN LENNON.

On this day, 7 years ago, DAVID BOWIE and IMAN attended the premiere of LAZARUS theatre production at The New York Theatre Workshop, NY, USA.

• On this day, 27 years ago, DAVID BOWIE performed at the Kings Hall, Belfast during his Outside Tour in 1995...

• On this day, 39 years ago, DAVID BOWIE performed at the Army Stadium, Bangkok, Thailand during 'The Bungle in the Jungle' leg of the Serious Moonlight Tour in 1983...

• On this day, 58 years ago, DAVID JONES & The Manish Boys performed twice at City Hall, Newcastle, unbilled and supporting on the Gerry & The Pacemakers/Gene Pitney/The Kinks tour in 1964...

FREAK OUT IN A MOONAGE DAYDREAM
5th December 2022

From Oscar-nominated filmmaker BRETT MORGEN, director of Cobain: Montage of Heck and The Kid Stays in the Picture, Moonage Daydream is an immersive cinematic experience; an audio-visual space odyssey that not only illuminatesthe enigmatic legacy of David Bowie, but also serves as a guide to living a fulfilling and meaningful life in the 21st Century.

Sitting alongside this release is the album companion which features unheard versions, live tracks and mixes, created exclusively for the film.

The 2-CD was released last month, with the 3-LP vinyl scheduled for release next year. The companion album features songs from spanning Bowie's career and includes previously unheard material, unique mixes created for the film and this release along with dialogue from Bowie himself. Highlights include a previously unreleased live medley of 'The Jean Genie/Love Me Do/The Jean Genie' recorded live at the final Ziggy Stardust concert at Hammersmith Odeon in 1973, featuring Jeff Beck on guitar. Other rarities include an early version of the Hunky Dory favourite 'Quicksand' and a previously unreleased live version of 'Rock 'N' Roll With Me' from the legendary 1974 'Soul Tour'.

The next instalment from LEAH KARDOS who is analysing the song 'Dollar Days' by DAVID BOWIE on her YouTube channel.

Leah's essential book is entitled: Blackstar Theory: The Last Works of David Bowie', which is available in most bookshops all over the world.

• On this day, 23 years ago, DAVID BOWIE performed at The Astoria, London during his 'hours...' promotional tour in 1999. Earlier the same day, David did an in-store signing at The Virgin Megastore. After the gig he held an after-show party at Pop in Soho...

• On this day, 44 years ago, DAVID BOWIE performed at Western Springs Stadium in Auckland, New Zealand, the final show of the Australasian leg of his 1978 world tour...

• On this day, 56 years ago, DAVID BOWIE and THE BUZZ performed at the Severn Club, in Shrewsbury in 1966. At this gig they performed 'Waiting For The Man' by The Velvet Underground as one of the encore songs. David played this song live before anyone one else in the world, he performed it before the album was actually released after receiving a testing pressing from his then manager Kenneth Pitt...

• On this day, 58 years ago, DAVIE JONES and THE MANISH BOYS gave two performanes at the ABC Cinema in Hull in 1964...

For those of you who use FACEBOOK - check out the DAVID BOWIE WONDERWORLD Group.

Feel free to join in with the other 79,100 plus members, add yourself and invite your Bowie fan friends. You never know what might get posted, or who you might meet...

THE SOUND AND VISION OF DAVID BOWIE
1st December 2022

Tickets are limited and are on sale now.

The upcoming memoir by GEOFF MACCORMACK first announced back in April is titled: 'DAVID BOWIE: ROCK 'N' ROLL WITH ME'.

David Bowie: Rock 'n' Roll With Me is Geoff MacCormack's remarkable photographic memoir, charting his lifelong friendship with David Bowie. Images bring MacCormack's stories to life, showing the places he and Bowie inhabited, the people they met and the adventures they shared. Beginning at Burnt Ash Primary school in the mid-1950s, the years go by in a whirlwind of discovering and making music. The book contains nearly 150 photos taken by MacCormack throughout the years, some never seen before: from touring the Ziggy Stardust and Aladdin Sane shows and sailing to New York on a world tour, to Bowie's first major film The Man Who Fell To Earth and the recording of Station to Station and his Thin White Duke persona.

David Bowie: Rock 'n' Roll With Me is an incredible story, told with wit and candour. A must for all Bowie fans, it sheds a rare insight into a friendship where two men shared their love for music from the moment they met to their final goodbyes.

About the Author:
Geoff MacCormack, David Bowie's lifelong friend, joined Bowie's 1973 world tour as an additional back-up vocalist and percussionist, and later as a 'Diamond Dog' in '74 and what would be known as 'The Young Americans Soul Tour'. He also worked on the six albums from Aladdin Sane to Station To Station. After three years of touring, recording and travelling with Bowie, MacCormack started an award winning (Gold Clio, Ivor Novello) music production partnership with Simon Goldenberg who he met, coincidentally, in The Three Tuns pub, home of Bowie's earlier 'Arts Lab'. For over 20 years, they wrote music for high-end advertising, films and TV. Geoff now manages the use and sale of his photographs of David Bowie around the world and has exhibited in St Petersburg, the USA and the UK, including the hugely successful 'Rock 'n' Roll With Me' exhibition at Brighton Museum & Art Gallery from September 2020 through to May 2022.

David Bowie: Rock 'n' Roll With Me is available to pre-order now!

• New book FLY IN THE MILK... DAVID BOWIE AND CRACKED ACTOR by SUSAN COMPO and MARK WARDEL to be published by Red Planet Books in Spring 2023.

• Theatre production LAZARUS written by David Bowie and Enda Walsh, Italian version directed by Valter Malosti to be staged in various cities in Italy. Performances begin in March through to June 2023 - more details

DAVID BOWIE - WHAM BAM THANK YOU MA'AM! by IVOR JONES, limited edition of #300, special collector's publication is now sold out. There are some unnumbered copies available which you can purchase at a reduced price - more details

Exclusive DAVID BOWIE lino-cut print available to PURCHASE - don't hang around, these are ALL the remaining original left-over stock from 38 years ago, once they've gone, they've gone!